Without the Church, Jesus 'is at the mercy of our imagination,' Pope says 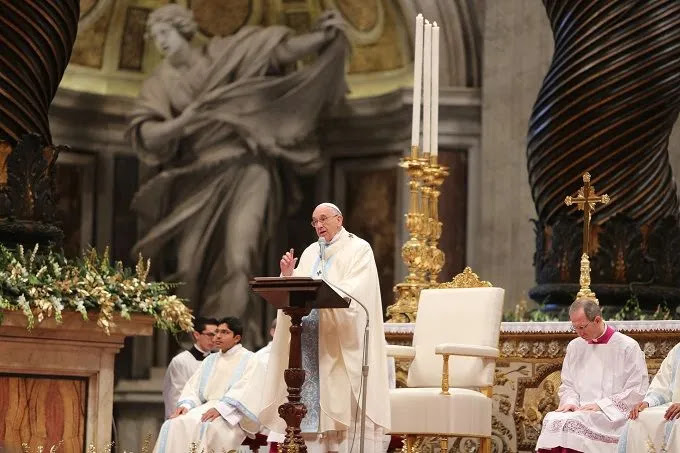 by Elise Harris
Vatican City, Jan 1, 2015 / 04:25 am (CNA/EWTN News).- In his homily on New Year’s Day, Pope Francis said that Jesus and his mother Mary are “inseparable,” just like Jesus and the Church, who is the mother of all humanity that guides her children to God.

“To separate Jesus from the Church would introduce an ‘absurd dichotomy,’” the Pope told Mass attendees who were present in St. Peter’s Basilica for his Jan. 1 Mass celebrating the solemnity of Mary, the Mother of God.

“(The Church) is like a mother who tenderly holds Jesus and gives him to everyone with joy and generosity…Without the Church, Jesus Christ ends up as an idea, a moral teaching, a feeling,” he said.

Without the Church and her guidance, our relationship with Christ “would be at the mercy of our imagination, our interpretations, our moods,” the Roman Pontiff continued.

It is not possible to understand the salvation offered by Jesus without also appreciating the motherhood of the Church, he explained, adding that it is also impossible to love and belong to Christ without loving and belonging to the Church, because the Church is God’s family who brings Christ to humanity.

“Our faith is not an abstract doctrine or philosophy, but a vital and full relationship with a person: Jesus Christ” who lives among us and can be encountered inside the Church through her sacraments, Pope Francis explained.

“No manifestation of Christ, even the most mystical, can ever be detached from the flesh and blood of the Church, from the historical concreteness of the Body of Christ.”

In his reflections, Pope Francis noted how the Church, in celebrating the solemnity of Mary as the Mother of God, reminds us that she, more than anyone else, has received the Lord’s blessing by giving a human face to the eternal God.

At Jesus’ birth, he and his mother Mary “were together, just as they were together at Calvary, because Christ and his mother are inseparable: there is a very close relationship between them, as there is between every child and his or her mother,” the Pope observed.

Mary is capable of being so close to her son due to the knowledge of heart and faith that she received from him, as well as her experience of motherhood and her openness to allowing God to enter into her own plans, the pontiff noted.

“She is the believer capable of perceiving in the gift of her Son the coming of that fullness of time…that is why Jesus cannot be understood without his Mother,” he said, reiterating that it is not possible to understand Jesus without the Church either, “because the Church and Mary always go together.”

By giving us Jesus, the Church offers humanity the fullness of God’s eternal blessing, he said, noting that Mary is the “first and most perfect” disciple of Christ, and is the one who opens the path to receive the Church’s motherhood.

Mary is the model of the pilgrim Church and is the one who sustains the Church in her maternal mission, he observed, noting that her “tactful witness” has accompanied the Church since its beginnings.

“She, the Mother of God, is also the Mother of the Church, and through the Church, the mother of all men and women, and of every people,” the pontiff said, and prayed that Mary would obtain the Lord’s blessing for all of humanity.

Pope Francis then noted how Jan. 1, in addition to the Marian solemnity, also marks the World Day of Peace, which this year holds the theme: “No Longer Slaves, but Brothers and Sisters.”

He prayed that the Lord would generate peace in individual hearts, within families and among nations, and called on each person, according to their capabilities, to combat modern forms of slavery and foster solidarity with the help of Jesus, who became our servant.

The Roman Pontiff concluded his homily by drawing attention to a statue of Mary and the child Jesus at the side of the altar, and noted how her title as “Holy Mother of God” dates back the Council of Ephesus in 431 A.D.

“What a beautiful greeting for our mother,” he said, and invited the congregation to join him in standing and honoring her by reciting aloud the title “Mary, Holy Mother of God” three times.
on January 04, 2015