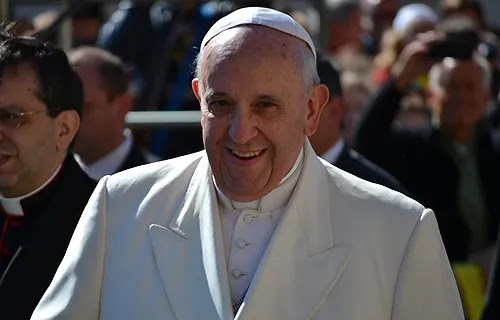 Vatican City, Sep 5, 2014 / 07:03 am (CNA/EWTN News).- In his daily homily on Friday Pope Francis discussed how the Pharisees condemned Jesus' apostles for not fasting, saying that Jesus renews the old law and brings a new Gospel of joy.

“One cannot understand the mentality of these Doctors of the Law – for example – these Pharisaical 'teachers,'” the Pope told mass attendees gathered in the Vatican’s Saint Martha guesthouse Sept. 5.

“The style of the Gospel is a different style, which brings the fullness of the Law, yes,  but in a new way: it is the new wine in new wineskins.”

Beginning by recounting how Jesus was criticized for the fact that his disciples did not fast and offer prayers like the Pharisees did, the Pope drew attention to Jesus’ response in using the parable of the new wineskins to illustrate what his coming signified.

“New wine, new wineskins: the ‘novelty’ of the Gospel – and what does the Gospel bring us? Joy and renewal,” the pontiff explained.

The Pharisees and scribes were all bound by their rules and commandments, he noted, saying that when St. Paul speaks to them he tells us “that before faith came – that is, Jesus – we were all kept in custody, as prisoners under the Law.”

Although this law was not a bad thing because the people were taken care of, the Bishop of Rome explained that there were still “prisoners, awaiting the advent of faith – that faith, which would be revealed in Christ, itself.”

Pope Francis went on to observe how the people of that time had both the Mosaic Law as well as numerous customs and small legal requirements which the scribes had prescribed. The rules cared for the people as prisoners, he said,  but left them waiting for the “ultimate liberty that God would give to His people through His son.”

He also pointed to the Beatitudes, which he described as “the law of love – total love” and the fullness of the law.

“Jesus, when he reproves these Doctors of the Law, is taking them to task for not caring for the people with the Law, but making them slaves to so many little laws, so many little things that had to be done,” he continued.

The pontiff went on to describe how all of these little things had to be done without the freedom offered by Jesus Christ, who brings us a new law sealed with his blood. “This,” he said, “is precisely the ransom that the people were awaiting.”

Another important lesson we can learn from this passage is that the Lord doesn’t want us to be afraid to change things according to the law of the Gospel, the Pope observed.

“St. Paul clearly distinguishes the children of the law from the children of faith: new wine in new wineskins – and this is why the Church asks all of us to change certain things,” he explained.

“She asks us to let go of decadent structures – they are useless – and to take up new wineskins, those of the Gospel.”

Pope Francis concluded his homily by reiterating that the Gospel brought by Jesus is something utterly new which brings joy, and can only be fully lived by a joyful and renewed heart.

He also prayed that God give everyone the grace to keep this new commandment of love, as well as the joy of the freedom that the Good News brings.
on September 07, 2014