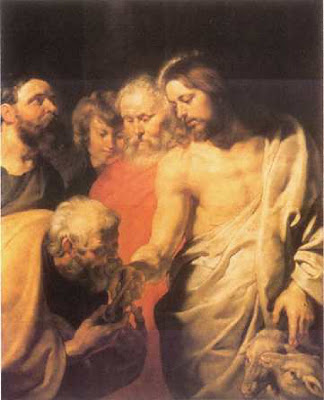 The God of Abraham, (the God) of Isaac, and (the God) of Jacob, the God of our ancestors, has glorified his servant Jesus whom you handed over and denied in Pilate's presence, when he had decided to release him.

You denied the Holy and Righteous One and asked that a murderer be released to you. The author of life you put to death, but God raised him from the dead; of this we are witnesses.

Now I know, brothers, that you acted out of ignorance, just as your leaders did; but God has thus brought to fulfillment what he had announced beforehand through the mouth of all the prophets, that his Messiah would suffer.

Repent, therefore, and be converted, that your sins may be wiped away.

Answer when I call, my saving God.
In my troubles, you cleared a way;
show me favor; hear my prayer.

Know that the LORD works wonders for the faithful;
the LORD hears when I call out.
Many say, "May we see better times!

LORD, show us the light of your face!" Selah
In peace I shall both lie down and sleep,
for you alone, LORD, make me secure.

My children, I am writing this to you so that you may not commit sin. But if anyone does sin, we have an Advocate with the Father, Jesus Christ the righteous one.

He is expiation for our sins, and not for our sins only but for those of the whole world. The way we may be sure that we know him is to keep his command ments.

Whoever says, "I know him," but does not keep his commandments is a liar, and the truth is not in him.

But whoever keeps his word, the love of God is truly perfected in him. This is the way we may know that we are in union with him.

Holy Gospel of Jesus Christ according to Saint Luke 24:35-48.

The disciples of Jesus recounted what had taken place along the way, and how they had come to recognize him in the breaking of bread.

While they were still speaking about this, he stood in their midst and said to them, "Peace be with you."

But they were startled and terrified and thought that they were seeing a ghost. Then he said to them, "Why are you troubled? And why do questions arise in your hearts? Look at my hands and my feet, that it is I myself. Touch me and see, because a ghost does not have flesh and bones as you can see I have."

And as he said this, he showed them his hands and his feet. While they were still incredulous for joy and were amazed, he asked them, "Have you anything here to eat?" They gave him a piece of baked fish; he took it and ate it in front of them.

He said to them, "These are my words that I spoke to you while I was still with you, that everything written about me in the law of Moses and in the prophets and psalms must be fulfilled."

Then he opened their minds to understand the scriptures. And he said to them, "Thus it is written that the Messiah would suffer and rise from the dead on the third dayand that repentance, for the forgiveness of sins, would be preached in his name to all the nations, beginning from Jerusalem.