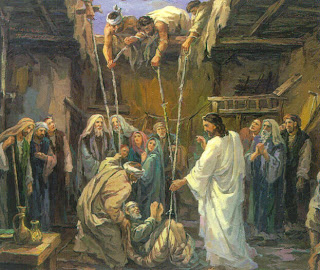 Remember not the events of the past, the things of long ago consider not; see, I am doing something new! Now it springs forth, do you not perceive it? In the desert I make a way, in the wasteland, rivers.
The people whom I formed for myself, that they might announce my praise. Yet you did not call upon me, O Jacob, for you grew weary of me, O Israel. You did not buy me sweet cane for money, nor fill me with the fat of your sacrifices; Instead, you burdened me with your sins, and wearied me with your crimes. It is I, I, who wipe out, for my own sake, your offenses; your sins I remember no more.


Happy those concerned for the lowly and poor;

when misfortune strikes, the LORD delivers them.

The LORD keeps and preserves them,

makes them happy in the land,

and does not betray them to their enemies.

The LORD sustains them on their sickbed,

allays the malady when they are ill.
Once I prayed, "LORD, have mercy on me;

heal me, I have sinned against you.

For my integrity you have supported me

and let me stand in your presence forever.
Blessed be the LORD, the God of Israel,

from all eternity and forever. Amen. Amen.


As God is faithful, our word to you is not "yes" and "no." For the Son of God, Jesus Christ, who was proclaimed to you by us, Silvanus and Timothy and me, was not "yes" and "no," but "yes" has been in him. For however many are the promises of God, their Yes is in him; therefore, the Amen from us also goes through him to God for glory.
But the one who gives us security with you in Christ and who anointed us is God; he has also put his seal upon us and given the Spirit in our hearts as a first installment.


Holy Gospel of Jesus Christ according to Saint Mark 2:1-12.


When Jesus returned to Capernaum after some days, it became known that he was at home. Many gathered together so that there was no longer room for them, not even around the door, and he preached the word to them.
They came bringing to him a paralytic carried by four men. Unable to get near Jesus because of the crowd, they opened up the roof above him. After they had broken through, they let down the mat on which the paralytic was lying.
When Jesus saw their faith, he said to the paralytic, "Child, your sins are forgiven." Now some of the scribes were sitting there asking themselves, Why does this man speak that way? He is blaspheming. Who but God alone can forgive sins? Jesus immediately knew in his mind what they were thinking to themselves, so he said, "Why are you thinking such things in your hearts? Which is easier, to say to the paralytic, 'Your sins are forgiven,' or to say, 'Rise, pick up your mat and walk'? But that you may know that the Son of Man has authority to forgive sins on earth"- he said to the paralytic, "I say to you, rise, pick up your mat, and go home."
He rose, picked up his mat at once, and went away in the sight of everyone. They were all astounded and glorified God, saying, "We have never seen anything like this."