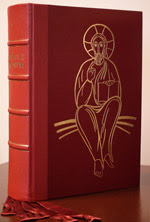 Change? What change? Apparently the English or US version of the Roman Missal is changing after final approval. These are to come into effect during Advent 2011. My question to you is what is new?
I mean I am not totally out to lunch on this and yes when I attended English Mass the current Roman Missal is what was used. When I switched parishes and started attending Hungarian Mass I noticed a difference in what was being said during mass. What the rest of you will now have to learn and get used to we have done in the Hungarian Mass all the time. Strange is it not? Is there different forms of mass in different languages or was it just a different translation for Americans? No idea but the form I know now and you will learn to me is much more profound and stronger for our faith. At least me thinks.
Here is a link to read about the changes,

Read through and take to heart the changes. Take care and God Bless!
on February 14, 2010