Saw this article this morning at Zenit about the Holy Father's 5 Anniversary as Pope, well written and gives us a glimpse of the Holy Father and what makes him tick so to speak, please enjoy,

Pope / Courtesy Of Fr Rosica's Blog
Much has been written about the first five years of Pope Francis’ Petrine Ministry. Having accompanied him, literally, into the conclave that elected this Argentine Jesuit Bishop of Rome on March 13, 2013, I have followed him closely over the past five years of his remarkable impact on the Church and on the entire world. I have listened to his admirers, his disciples and his critics. I wish to offer these brief reflections, fully aware that so much more can be said.
By choosing the name Francis, he is also affirming the power of humility and simplicity. This Argentine Jesuit is not simply attesting to the complementarity of the Ignatian and Franciscan paths. He is pointing each day to how the mind and heart meet in the love of God and the love of neighbor. And most of all, Francis reminds us day in and day out how much we need Jesus, and also how much we need one another along the journey.
Having served as one of the official spokespersons at the Vatican during the historic Papal transition of 2013, I must return to a very programmatic text for the Pontificate now unfolding before our very eyes. It is a Cardinal’s intervention during the pre-conclave meetings of Cardinals on the morning of March 7, 2013. It was entitled: The Sweet and Comforting Joy of Evangelizing. The Cardinal began by reminding his brother Cardinals in that upper room, “Evangelization is the raison d’etre of the Church — “the sweet and comforting joy of evangelizing”. It is Jesus Christ himself who impels us from within. The Cardinal offered four simple yet profound points.
– To evangelize implies apostolic zeal. To evangelize implies a desire in the Church to come out of herself. The Church is called to come out of herself and to go to the peripheries not only in the geographic sense but also the existential peripheries: those of the mystery of sin, of pain, of injustice, of ignorance, of doing without religion, of thought and of all misery.
– When the Church does not come out of herself to evangelize, she becomes self-referent and then she gets sick. (cf. The hunchback woman of the Gospel). The evils that over the course of time happen in ecclesial institutions have their root in a self-reference and a sort of theological narcissism. In the book of Revelation, Jesus says that he is at the door and knocks. Evidently the text refers to his knocking from outside in order to enter but I think of the times in which Jesus knocks from within so that we will let him come out. The self-referent Church keeps Jesus Christ within herself and does not let him come out.
– When the Church is self-referent without realizing it, she believes she has her own light. She ceases to be the mysterium lunae and gives way to that very great evil which is spiritual worldliness. The self-referent Church lives to give glory only to one another. In simple terms, there are two images of the Church: the evangelizing Church that comes out of herself: “Hearing the word of God with reverence and proclaiming it with faith” – the first words of the Council’s Dogmatic Constitution on Divine Revelation, and the worldly Church that lives within herself, of herself, for herself. This must give light to the possible changes and reforms which must be made for the salvation of souls.
– Thinking of the next Pope, he must be a man that from the contemplation and adoration of Jesus Christ, helps the Church to come out to the existential peripheries, that helps her to be the fruitful mother who lives from the sweet and comforting joy of evangelizing.
That Cardinal was the Archbishop of Buenos Aries whose name was Jorge Mario Bergoglio. His new name is Francis. He is a Jesuit. His humility has impressed many people around the entire world. His style has truly become substance. It is the most radically evangelical aspect of his spiritual reform of the papacy, and he has invited all Catholics, but especially the clergy, to reject success, wealth and power. Francis’ spiritual father, Ignatius of Loyola, insisted that a Jesuit is never to have an anti-ecclesial spirit, but always be open to how the spirit of God is working. The Jesuit commitment not to seek ecclesiastical office, even in the Society is an outgrowth of that experience. Francis has so interiorized those values that without hesitation he applies it to clerical and curial reform today. 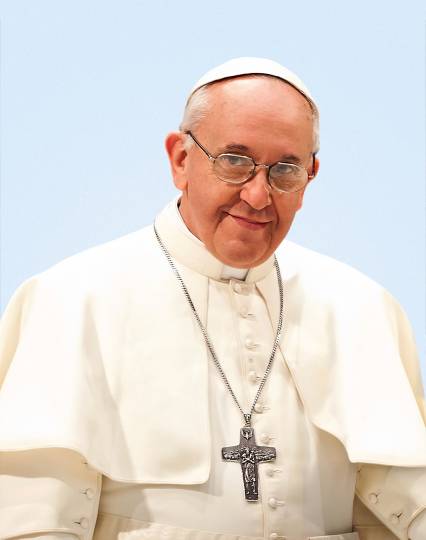 In Ignatius’ eyes, humility is the virtue that brings us closest to Christ, and Pope Francis appears to be guiding the church and educating the clergy in that fundamental truth. Francis teaches us that precisely this humility is essential to make the New Evangelization real and effective both within the church and in her encounter with the world. Pope Francis models for us each day a Church of humility, tenderness and mercy, an incarnational Church that walks with people on the journey. A Church that listens, discerns, accompanies, forgives, blesses, speaks boldly and courageously; a Church that weeps with those who weep and rejoices with those who rejoice. A Church that does everything she can to resist the temptation to reduce the faith to moralism; a Church that resists all attempts to disincarnate the message and the person she holds deep within her heart: Jesus Christ. A Church that strives to integrate people back into the community of faith. In the heart and mind of Pope Francis, we need “a church that is again capable of restoring citizenship to so many of its children that walk as if in exodus.”
Nor can I ever forget his parting words to his brother bishops of the United States of America in September 2015, as he took leave of them in St. Matthew’s Cathedral in Washington, DC. Francis spoke of the Church and priestly ministry that he envisions for America and for the world:
“…a Church which can gather around the family fire remains able to attract others. And not any fire, but the one which blazed forth on Easter morn. The risen Lord continues to challenge the Church’s pastors through the quiet plea of so many of our brothers and sisters: “Have you something to eat?” We need to recognize the Lord’s voice, as the apostles did on the shore of the lake of Tiberius (Jn 21:4-12). It becomes even more urgent to grow in the certainty that the embers of his presence, kindled in the fire of his passion, precede us and will never die out. Whenever this certainty weakens, we end up being caretakers of ash, and not guardians and dispensers of the true light and the warmth which causes our hearts to burn within us (Lk 24:32).”
The playbook and script for Francis’ Petrine Ministry do not emanate from Buenos Aires, nor from Rome, Loyola or Assisi. They come from Bethlehem, Nazareth, Jerusalem, Galilee and Emmaus where the whole story began in the first place! If various groups and individuals in the Church seem to have difficulty with Pope Francis, I wonder if their difficulties are not with Francis, but rather with his script, and the author of that script.
On the late afternoon of March 13, 2013, Jorge Mario Bergoglio received the call to go, rebuild, repair, renew and heal the church. There are those who delight in describing the new Pope as a bold, brazen revolutionary sent to rock the boat. Others think he has come to cause a massive shipwreck. But the only revolution that Pope Francis has inaugurated is a revolution of tenderness, the very words he used in his recent major letter on “The Joy of the Gospel.” [Evangelii Gaudium #88]
Many are calling Francis the great revolutionary. The only time he uses the word ‘revolution’, is in Evangelii Gaudium paragraph 88, when he speaks about the revolution of tenderness of the Son of God who took on our flesh. I also think that there is another revolution that Francis is offering us: the revolution of normalcy. What Francis is showing us and modeling for us is normal Christian, pastoral behavior. Whenever we are confronted by such normal, simple Christian behavior, it throws some of us for a loop, because it’s more of a reflection on our own abnormal behavior and human cravings for ways of the world rather than the path of Gospel living that leads to holiness here below and in the life to come. Pope Francis’ normal Christian behavior is for each of us a challenge, a consolation, and a form of tenderness that we’ve desired for, for a long time. He demands a lot while preaching about a God of mercy, by engaging joyfully with nonbelievers, atheists, agnostics, skeptics, and those sitting on the fences of life – many who thought that Christianity has nothing left to add to the equations of life. Through the powerful and provocative messages deep within Evangelii Gaudium, Laudato Sì and Amoris Laetitia, and daily reflections flowing from simple, Eucharistic celebrations in the chapel of a Vatican Guest House, Francis has connected with and encountered a humanity that hungers and thirsts for a message of hope and consolation.
We need the Francis revolution of tenderness, mercy and normalcy now more than ever before. I can only hope and pray that we learn from him and imitate him.
Fr. Thomas Rosica, CSB
CEO, Salt and Light Catholic Media Foundation
March 13, 2018
on March 14, 2018