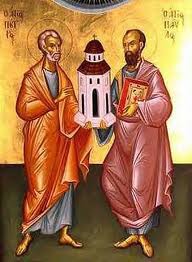 Peter and John were going up to the temple area for the three o'clock hour of prayer.

And a man crippled from birth was carried and placed at the gate of the temple called "the Beautiful Gate" every day to beg for alms from the people who entered the temple.

When he saw Peter and John about to go into the temple, he asked for alms. But Peter looked intently at him, as did John, and said, "Look at us."

He paid attention to them, expecting to receive something from them. Peter said, "I have neither silver nor gold, but what I do have I give you: in the name of Jesus Christ the Nazorean, rise and walk."

Then Peter took him by the right hand and raised him up, and immediately his feet and ankles grew strong. He leaped up, stood, and walked around, and went into the temple with them, walking and jumping and praising God.

When all the people saw the man walking and praising God, they recognized him as the one who used to sit begging at the Beautiful Gate of the temple, and they were filled with amazement and astonishment at what had happened to him.

R. (5) Their message goes out through all the earth.

The heavens declare the glory of God;
and the firmament proclaims his handiwork.
Day pours out the word to day;
and night to night imparts knowledge.
R. Their message goes out through all the earth.

I want you to know, brothers and sisters, that the Gospel preached by me is not of human origin. For I did not receive it from a human being, nor was I taught it, but it came through a revelation of Jesus Christ.

For you heard of my former way of life in Judaism, how I persecuted the Church of God beyond measure and tried to destroy it, and progressed in Judaism beyond many of my contemporaries among my race, since I was even more a zealot for my ancestral traditions.

But when God, who from my mother's womb had set me apart and called me through his grace, was pleased to reveal his Son to me, so that I might proclaim him to the Gentiles, I did not immediately consult flesh and blood, nor did I go up to Jerusalem to those who were Apostles before me; rather, I went into Arabia and then returned to Damascus.

Then after three years I went up to Jerusalem to confer with Cephas and remained with him for fifteen days.

But I did not see any other of the Apostles, only James the brother of the Lord. --As to what I am writing to you, behold, before God, I am not lying.

Jesus had revealed himself to his disciples and, when they had finished breakfast, said to Simon Peter, "Simon, son of John, do you love me more than these?" Simon Peter answered him, "Yes, Lord, you know that I love you."

Jesus said to him, "Feed my lambs." He then said to Simon Peter a second time, "Simon, son of John, do you love me?" Simon Peter answered him, "Yes, Lord, you know that I love you."

Jesus said to him, "Feed my sheep. Amen, amen, I say to you, when you were younger, you used to dress yourself and go where you wanted; but when you grow old, you will stretch out your hands, and someone else will dress you and lead you where you do not want to go."

He said this signifying by what kind of death he would glorify God. And when he had said this, he said to him, "Follow me."